He co-hosts The Late Show, weeknights on BBC Radio London with fellow poet Salma El-Wardany. Their show is centred around the personal stories of Londoners, the creatives at the heart of the city and the arts and culture that reflect who we are.

LionHeart’s work within the architecture industry is extensive. He is the first Poet in Residence at Grimshaw Architects (visiting and working with various offices globally), Snohetta, Squires & Partners, PLP and practices in Japan (Junya Ishigami, Tezuka Architects and more). Using poetry, he is particularly interested in expressing the influence an architect’s design can have on mental health. Through interviewing and working closely with architects, he observes the relationship buildings have with our cognitive behaviour, and how that in turn, forms as well as informs our sense of wellbeing. These findings are then used as the basis for a collection of poems, workshops, performance pieces and commissioned articles exploring how the application of materials, form and lighting within the built environment impacts us.

Along with various residencies, LionHeart worked with Kengo Kuma when he was in Japan in 2019 and again that year for the London Design Fair where Kengo’s installation ‘Bamboo Ring: Weaving into Lightness’ featured. He is a judge for the 2020 Dezeen Awards joining Norman Foster, Paola Antonelli, Joyce Wang and Michael Anastassiades in this year’s star-studded panel. He has been a Guest Speaker at Bjarke Ingels Group (BIG) at both their Copenhagen and London offices, is the Poet in Residence for Citizen magazine as well as the Guest Editor for the Wellcome Collection for their ‘Living With Buildings’ exhibition.

In addition to his work in the built environment, LionHeart is the first Poet in Residence at the prestigious Saatchi Gallery, exploring and creating works in response to the art work, pertaining to mental health. LionHeart has been commissioned by brands including Warner Music Group, Lloyds of London, the BBC, the British Library and Gillette for various campaigns. 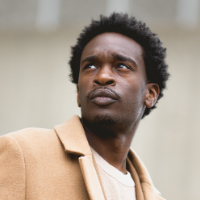