Hassan Abdulrazzak is of Iraqi origin, born in Prague and living in London. He holds a PhD in Molecular Biology and has worked at Imperial College and Harvard University.

Hassan is commissioned by the Royal Shakespeare Company.

He has adapted Baghdad Wedding into a feature film for Focus Features, wrote an original screenplay called Cutting Season about FGM for New Century. He has also written four episodes for HWJN, an upcoming TV series commissioned by O3 and Image Nation productions.

He wrote an episode of The Good Listener, a BBC radio 4 drama series about GCHQ, developed by Fin Kennedy and Boz Temple-Morris which was broadcast in 2018.

He is the recipient of George Devine, Meyer-Whitworth, Pearson theatre awards as well as the Arab British Centre Award for Culture. Love, Bombs and Apples won the Bay Area theatre award for outstanding production in 2018. And Here I Am won best monodrama at Sharm El Sheikh International Theatre Festival For Youth in 2019. He was a Sundance Theatre Lab Fellow in 2020.

And Here I Am

”Irreverently funny….charming and compelling” The Stage ****

”Witty and insightful” The Scotsman ****

“Hassan Abdulrazzak’s astonishing play tells how human lives are shaped by political crisis” Michael Billington (The Guardian). Billington chose it as his favourite play of the year.

“The Prime Minister and his cabinet should take a brief course in political illumination. They should go to see Baghdad Wedding. Hot theatre” Evening Standard**** 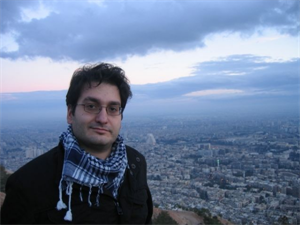