Céin is the exciting, imaginative director behind the cult BBC comedy series TOP COPPERS and the popular BBC true-crime spoof SEXY MURDER, both of which he also co-wrote and created. Alongside his scripted comedy work, Céin has become known for his directing across various documentary, entertainment and commercial concepts, including many sketches and promos for E4’s BAFTA winning reality series MADE IN CHELSEA, giving him vast experience across a range of different genres and formats, seamlessly mixing between them. Recently, Céin was given the honour off being asked to direct Channel 4’s ALTERNATIVE CHRISTMAS MESSAGE and has just completed a mini-pilot for Channel 4 of his dark, crime thriller comedy LAW MAN, starring Nick Mohammed, Aimee Ffion-Edwards, Philippa Dunne and Mark Addy. He’s also currently developing two animation projects and his first feature film concept. Though he works largely in collaboration with his writing partner Andy Kinnear, Céin also writes independently and directs other writers’ work, enthusiastic about collaborating with equally passionate TV and film makers. 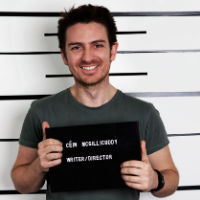