Black Girl Gamers is a popular and influential platform and community that advocates for diversity and inclusion and heightening Black Women’s voices. It is also the home of the largest community of Black women gamers globally, boasting 7000+ members. BGG has been a moving force in the industry and sparked discourse on Black women’s representation in games and the industry.

As well as curating online content, Black Girl Gamers hosts their own events including The Summit in partnership with Twitch, and were behind the UK’s first women only gaming event: Gamer Girls Night In. They have been featured on BBC NEWS Radio, SKY News, ITV News and have partnered with BELONG, ASOS, EA, ANYKEY, V&A MUSEUM, TWITTER, FACEBOOK, BELONG, DIXONS to bring about its mission of revolutionising the industry 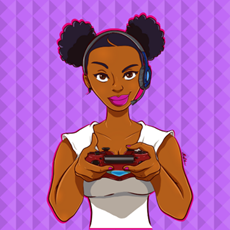